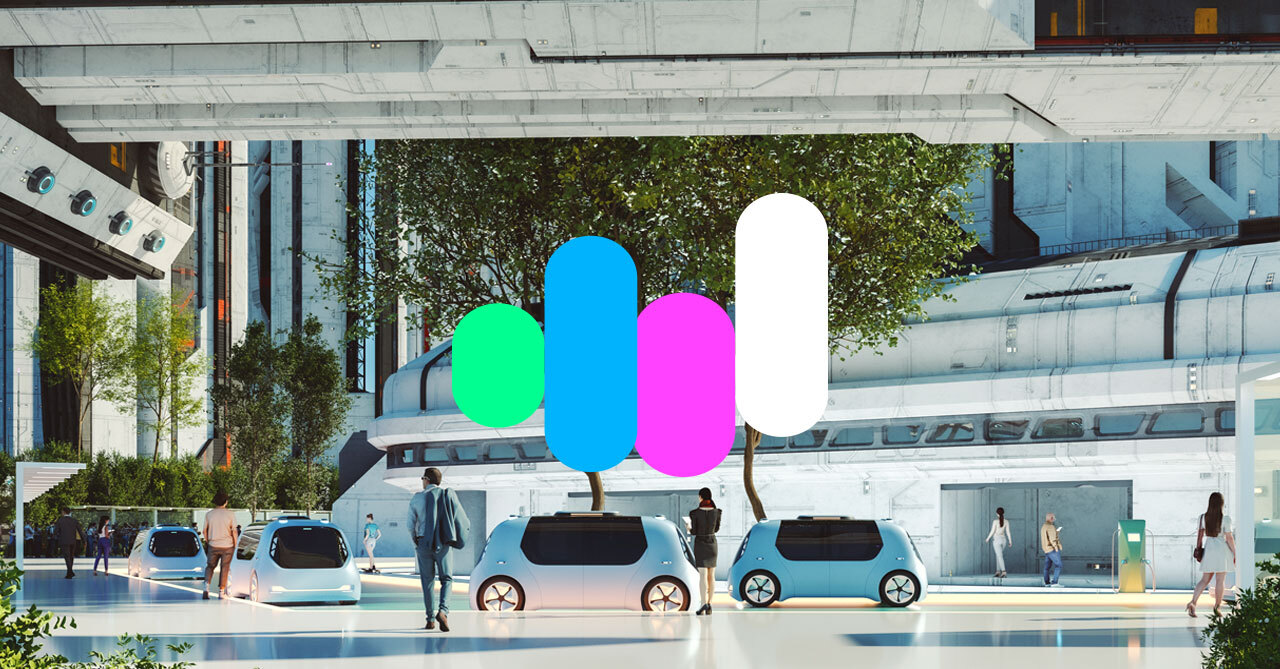 At Magnetic, we work closely with many curious partners, imagining “what might be” – from societal infrastructure to individual behaviour. This helps us surface new thinking and opportunity. How and where we live is changing rapidly. In this article our design team imagine a future city, fuelled by joined-up technology and data. What might that look like? How would we experience it? And importantly, what questions and challenges might it pose for our progress?

Today, the world’s population is around 7.75 billion. By 2050, it is predicted to grow to 9.8 billion, with two thirds of us predicted to live in cities.

Coupled with the population increase, the planet is now in a globally recognised critical state of climate emergency due to our unsustainable ways of living. Cities need to become ‘smarter’ to cater for the demand for cleaner energy, better infrastructure, better public services, more housing, more water and more nutritional and sustainable food choices, amongst many other needs.

The smart city can be defined as a city that drives efficiencies by harnessing data through its environment, objects and citizens. Monitoring this data enables quick responses to problems and affords connections to be made, in places they hadn’t existed before. Smart cities employ the ‘The Internet of Things’ (IOT) to create connections between physical artefacts in our everyday world.

In contemporary life, smart cities are nascent. There are some concerns over existing smart cities’ inability to take into account lived experience and community, alongside this process of technological optimisation.

We know that the city’s importance to humanity’s future is only going to grow. This concern as well as the wider question of how we might transition into this future, is a pressing one for designers. Our approach to these questions led us to imagine this snapshot vision of a smart city in 2050.

It is through this expansive lens that we hope to open up new perspectives and offer new possible means of living in the city.

We have taken technological leaps of faith, in order to create a provocative vision of a future reality. This piece of speculative design isn’t intended as celebratory, rather its intention is to open up your own thinking as to the direction you might want urban life to take in 2050.

Alongside our future focus, we have also adopted methods of design that we believe will become commonplace in the future. For example: Combining AI-generated imagery with our own visual design work.

In the 2050 world of free flowing data, more and more questions have appeared in the fore. Ethical concerns have increased around corporate data centralisation. How might we as citizens interact with the city so that we can capitalise on data in real-time? In 2050, all data streams are now centralised, so our interactions with the city have become a democratised, shared responsibility of the people.

Imagine a neutrally governed universal interface. One potential ‘master’ operating system through which we interact with each and every city. 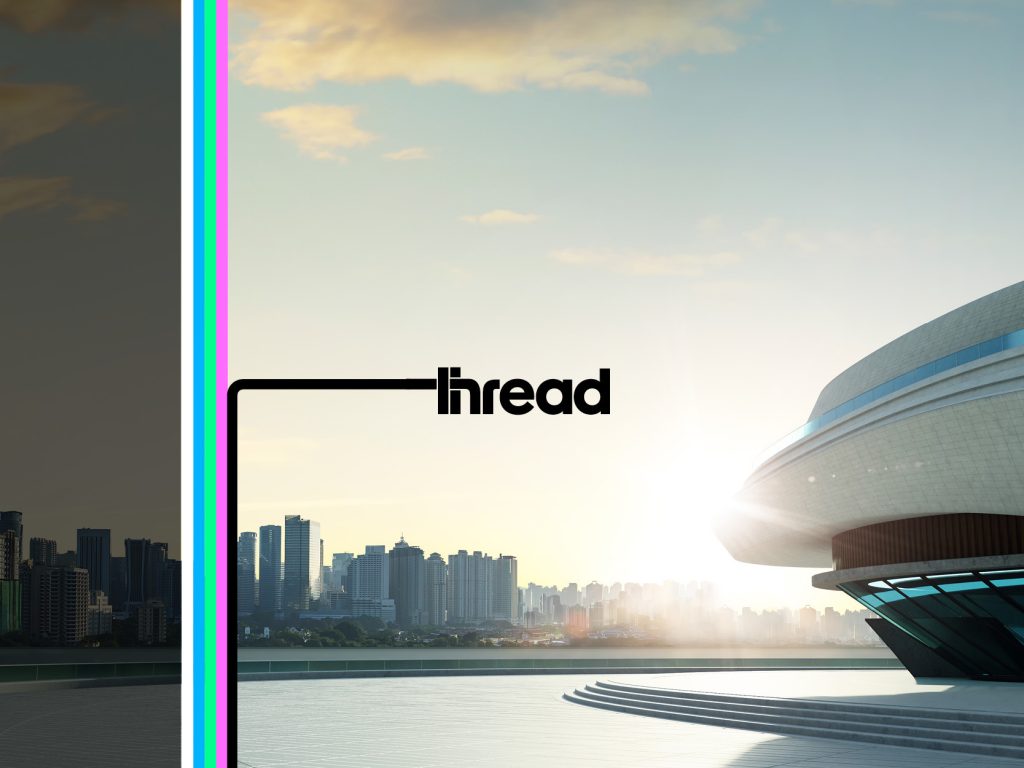 Our connection to the data-driven fabric of the city. 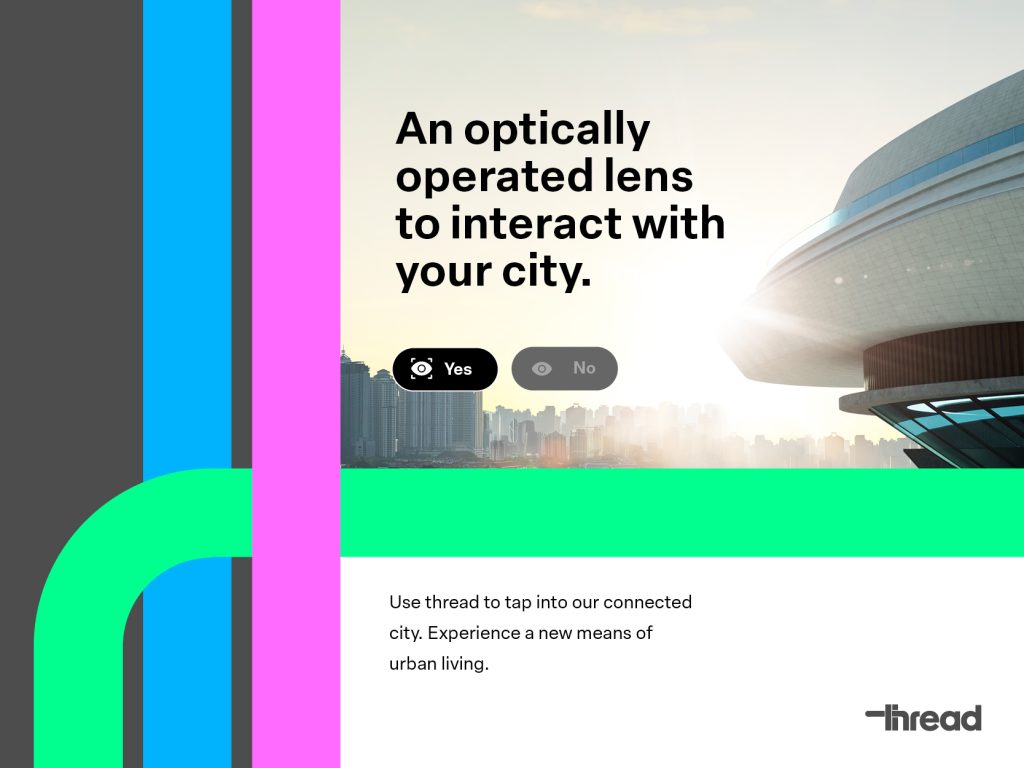 An elemental lens through which we carry out all of our daily endeavours. A platform for everything, which is in constant communication with the IOT and accessible from any device, anywhere. From healthcare, to shopping or mobility; ‘thread’ could be overlayed onto our cities and experienced through AR lenses, in the least obstructive possible way. Recessive enough to allow us to perceive the city around us, but expansive enough whenever or wherever needed.

thread ia a personalised, intuitive and accessible platform which can be operated from screen and AR devices alike, by all citizens, from anywhere in the world.

Clara lives in a smart city in 2050. Here’s her citizens’ dashboard from where she manages her daily life. 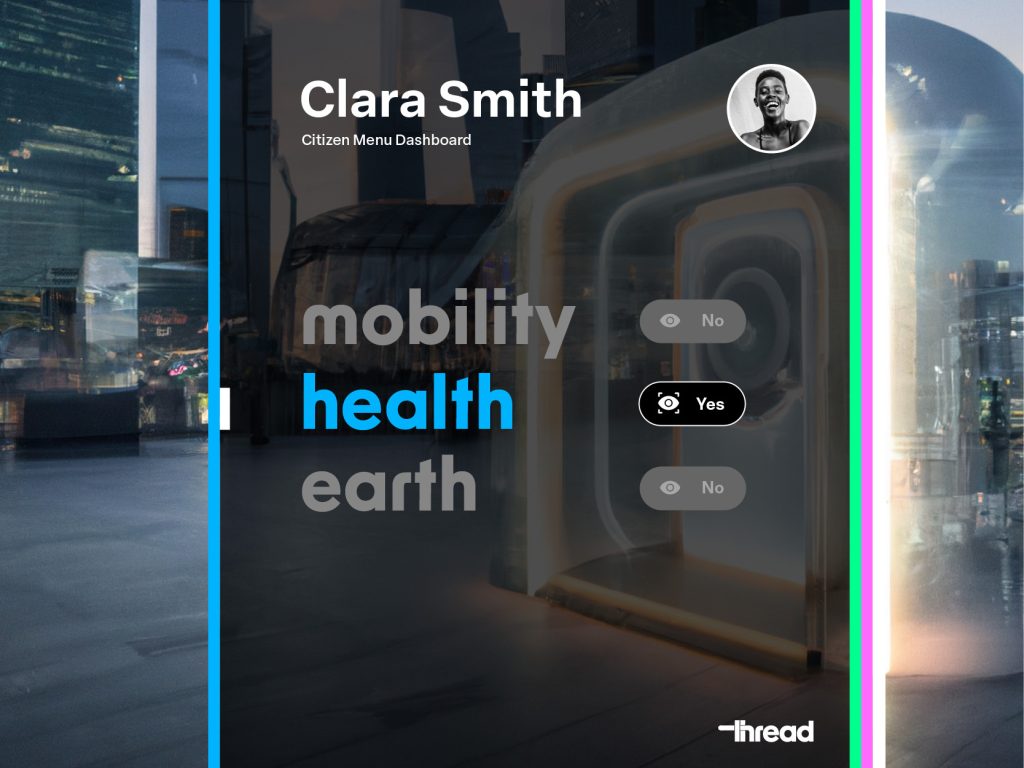 In 2050, the ageing and exploding population has put a greater strain on health services within the city. Designers and scientists in collaboration with a citizens’ assembly have deployed AR and AI capabilities to create a more holistic system of health and wellbeing that takes some of the strain away from city healthcare professionals.

Personal wearable devices have developed far past the point of merely being able to measure pulses and blood oxygen levels; they are now able to develop a more detailed picture of the personal health of their users. Yet not only do they provide a vision of personal health – they also provide instant supplemental and nutritional recommendations by connecting to health and wellbeing products and services around the city.

However, for a complete check up, citizens require something more extensive. Body scanning machines across the city now provide a comprehensive and instantaneous diagnosis up to a certain threshold. The human touch within healthcare – clearly required within areas such as mental health –  is directed to by the scanner, after its use. 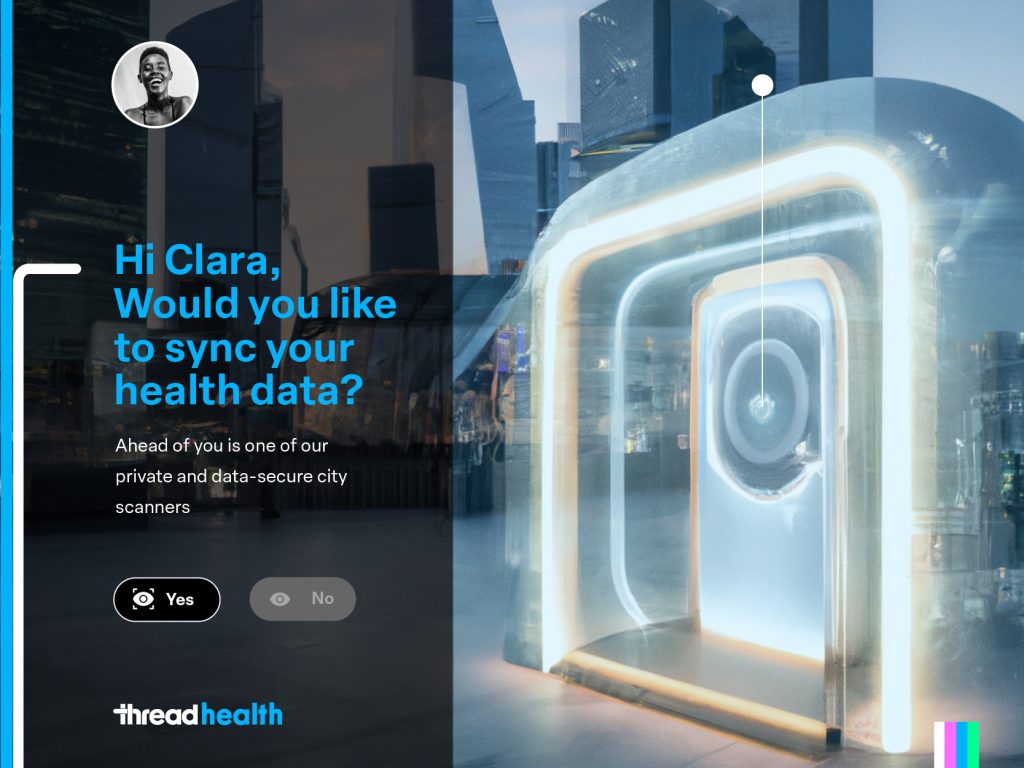 These machines act as a proactive force for health and wellbeing, providing suggestions for  specific amendments to nutrition and lifestyle, as well as lifting some of the burden of check-ups and diagnosis created by the ageing and increasing population.

Just like in the distant past of 2022, when people synced music to their digital devices, people are now able to use communal machines around the city to sync their own health data with the city’s healthcare system. They’ll receive instant prescriptions and a digital record of their health and recommendations. Due to concerns over privacy, this data is intended to only be accessible by health services and not the rest of thread.

With a move towards no car zones across most city centres due to citizen safety and the environment, the importance of real time communication of our highways becomes even more paramount. Single person transport systems are advanced and widespread whilst car travel is fully automated and electric.

Vehicle ownership has naturally become a thing of the past whilst car manufacturers begin to shift towards becoming mobility service providers, based on a form of the subscription model. 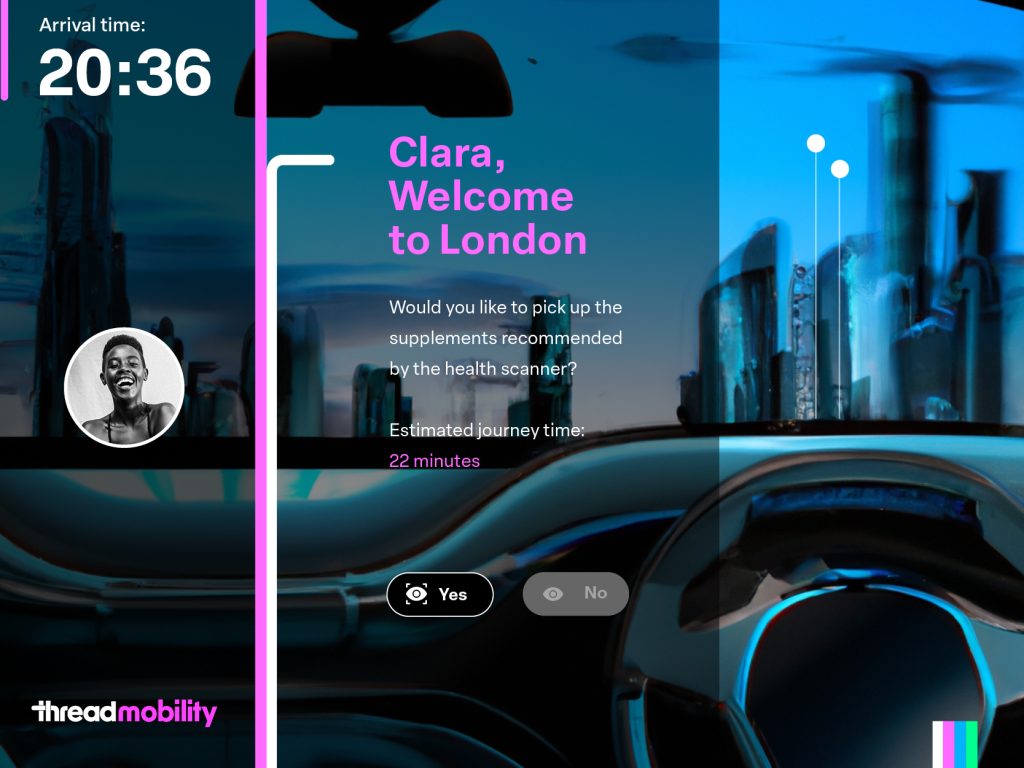 In the image above, Clara has decided they’ll make the journey to pick up their supplements personally, so they’re directed instantaneously to where their vehicle has been deployed. The car’s internal interface gives a real time estimation of arrival by connecting to the highway data, whilst also notifying the store when to pick out the supplement recommendation for collection, based on the time of arrival.

With automation now applied to all vehicles, Clara can even browse local yoga classes whilst on route.

In 2050, no longer is our natural environment a silent participant in our urban communities. Developments in neuroscience and AI have led to the ability to interface with the natural world – we are now able to measure the reactions of many animals and plants to their environment. AI is used to translate these into natural language and dialogue.

This has allowed conversations to develop between nature and humans on how the city and personal homes can better be designed to suit their mutual interests. 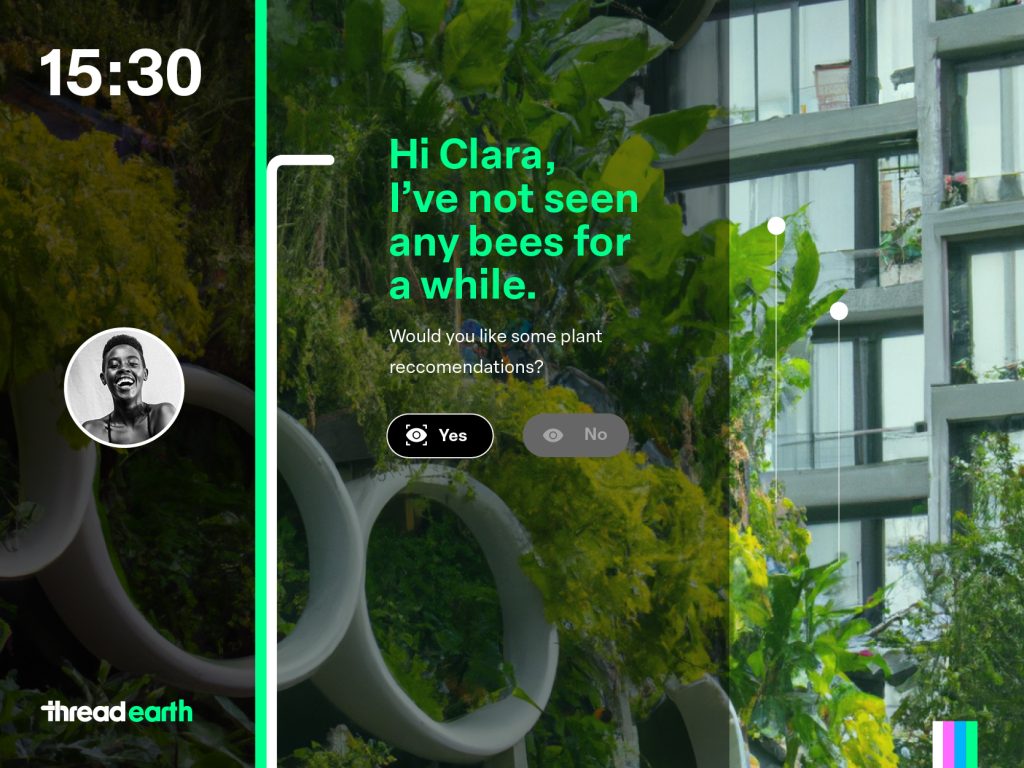 Human and planetary health are interconnected and thread has catalysed a more harmonious relationship between the two. In 2050 families and communities are able to adapt their homes in direct consultation with their natural environment – and maintain a dialogue about how this is going.

AI is now able to translate nature’s concerns, through registering nature’s reactions to certain behaviours into accessible language for us as humans. Clara, backed by real data, can now begin helping their local insect population.

Any unified digital operating system like the one we have envisioned has to be designed and built in direct collaboration with the communities who will be living with it. Failure to embrace diversity of thought and experience, and any attempt to introduce a top-down solution, would result in irrelevance and rejection.

To embrace the community as a whole, the marriage of the digital and physical world should have accessibility and inclusivity at its heart.

The digital and physical world blend more and more by the day. We only have to witness the impact that technology in 2022 is already having on our mental health to observe an ever-increasing reliance on technology for our sense of community.

There are credible arguments that increasing the presence of digital technology within our lives already puts too much strain on our cognitive capacity as humans. One of the criteria of success then for example for a unified digital system like this to work, would be its ability to shift away from any biassed user experience that functions based on dopamine hits.

We’ve offered only one vision of the smart city in 2050, but this vision sees the continuation of the trend of an ever-increasing reliance on technology. What we’ve learned is this; to truly take a human centric approach, we need to re-think digital products and services, as they exist today, so that they become less harmful to us and better serve the planet.

Our reliance on technology is a choice. We are also capable of making the choice to become less reliant on technology altogether.

It’s in our capacity to shape our world and our future – how do we want to shape it?

To continue the conversation, get in touch with David Bailey Magnetic Executive Creative Director – David.Bailey@wearemagnetic.com.